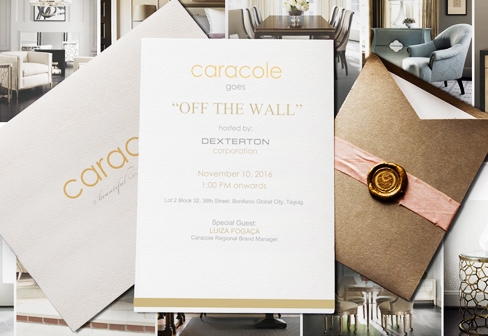 Caracole Off The Wall

Established in 2009, Caracole has become a name that continuously impresses the international market with its inspiring approach on creating high style furniture pieces that are ultimately unique and infinitely adaptable to every room of the home.

While it has been available in the Philippines through its exclusive partnership with Dexterton Corporation since 2010s, a special event entitled Caracole “Off The Wall” was held on the 10th of November 2016 at the newly opened Dexterton showroom located at Lot 2, Block 32, 38th Street, North Bonifacio, Bonifacio Global City.

To introduce its newest Caracole showroom, occupying the whole third floor of the building, the company invited guests who were mostly architects, interior designers and press, who had also responded with excitement on getting inspired by the brand’s exceptional style. The showroom tour was led by Luiza Fogaca, Caracole’s Regional Brand Manager, who presented the brand’s eclectic mix of materials and distinctive pieces. She also demonstrated some of the furniture’s multifunctional features that help define the brand’s notable style. Moreover, she shared some of Caracole’s signature pieces such as the In Your Dreams bed frame, in its classic look inspired with fresh and modern design elements, stately rendered in mahogany, with gold bullion accents and intricately hand applied bone inlay, giving the head board its sophisticated disposition; Ice Breaker accent chair with its distinctive custom engineered frame wrapped in gold bullion metal tone and a micro-herringbone pattern in off-white linen-blend fabric offering its simplistic beauty; and the remarkable Awesome Blossom dresser richly made in mahogany finish that boasts brilliantly gold leaf chinoiserie façade, hand painted cherry blossom branches and beautiful shades of Swarovski crystals that are strategically placed in the center of a few key blossoms so that the piece almost winks at you as you walk by.

Luiza gave a short brand overview presentation and a look back on the brand’s history and success story, followed by an interview hosted by Ms. Audrey Liu, Dexterton’s Assistant Treasurer, where they also let the audience take a glimpse on Caracole’s upcoming 2017 collection.

It was an eventful day for everyone as after the program, the guests, together with Luiza and Dexterton management, were treated to an enjoyable cocktails and wine.